Despite the rise of the T20 format over the last decade and as great as the ODI World Cup was recently, the five-day version of test cricket still creates a buzz around it unique to the sporting calendar. While its popularity has undoubtedly waned in recent times, Test cricket is still considered by many as the ultimate “Test” of a player’s skills in the game and this week, we have much to look forward.

Three test matches bowl off this coming Thursday and it should wet the appetite for the sport’s longest format, not to mention, it is all part of the newly formed ICC World Test Championship.

The home side won the first match of this two-Test series quite comfortably as they chased down 268, as skipper Dimuth Karunaratne played a starring role with a century, ably supported by opening partner Lahiru Thirimanne. The pair put on 161 runs at Galle as the Lions lost only four wickets as they romped to victory and opened their account in the Championship with 60 points.

The “Lankans” had a total team effort in the first match as virtually everyone contributed in some form or fashion from the aforementioned openers to all-rounders Angelo Matthews & Dhananjaya de Silva to the bowlers Suranga Lakmal & Akila Dananjaya. Every player stood out to be counted. The only blot being Dananjaya being reported for a suspect bowling action in the aftermath and, while he will be eligible to play in the second Test, if he fails his assessment after that game, he faces a one-year suspension. The home team is expected to play the same team with no casualties and will be buoyed by the first test outcome.

The New Zealanders’ biggest concern is their top-order batting, which failed to fire last weekend as none of Jeet Raval, Tom Latham & even usually reliable skipper Kane Williamson registered a score of over 50. Playing away from home is a tough task in itself, but when the middle order is constantly exposed as the Kiwis own was in Galle, the team has little chance. To their credit, the middle and lower order did a good enough job to put runs on the board. The bowling was solid enough with left-arm spinner Ajaz Patel’s second innings performance the only concern but the 30-year did grab a fifer in the first innings. Given the quick turnaround, it maybe harsh, but we may just see batsman Henry Nicholls move up to open, replacing Raval and all-rounder Colin de Grandhomme come in to add his skills to all departments of the game. 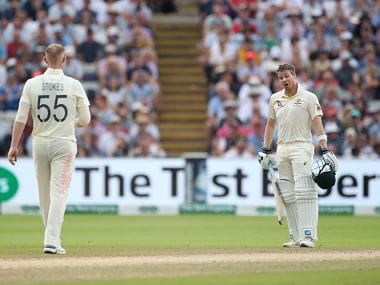 The Ashes are intriguingly poised as the Aussie hold a 1-0 advantage after a couple of Tests, following their win at Edgbaston and a closely contested draw at Lord’s. The arch-rivals now head to Headingley to resume the battle for the game’s most traditional trophy.

The hosts are in a position where they will have to probably win the rest of the contests in this series to regain the Ashes. Jason Roy’s experiment as a Test opener has so far failed in the four innings, and heading into the third Test, this maybe the biggest question mark for the English side’s starting eleven. However, the batting as a whole is looking quite fragile for the hosts, as captain Joe Root, Jos Butler & Joe Denly continue to struggle and had it not been for Ben Stokes’ blistering century, they may well have been 0-2 down in the five-match battle. Anything less than at least one of the specialist batsmen, particularly someone in the top order making a significant score, could spell danger for the team. There are no such concerns with the bowling, as despite having lost Jimmy Anderson after just half an hour into the initial match, the fantastic debut of Jofra Archer, the consistency of Jack Leach and the ever-reliable Stuart Broad & Chris Woakes means getting Aussie wickets has not been a problem. The duel between Rajasthan Royals teammates Archer and Aussie batsman Steve Smith has already become the stuff of folklore.

The men from “Down Under” will have a few dilemmas to sort out before announcing their team at Headingley. Following the duel between Smith and Archer, it has been determined that the New South Welshman has been ruled out for the third Test. The question is, does the management go with his concussion replacement from Lord’s, Marnus Labuschagne, or opt for an experienced all-rounder in Mitchell Marsh? From a bowling front, there is pretty much a settled attack, meaning speedstar Mitchell Starc remains on the bench. Captain Tim Paine has been in the job for just over a year, and this coming Test could well define his legacy.

The Caribbean side hosts the Asian giants in a series starting with the upcoming two Test series, with both looking to get off to a positive start in the Championship. Both teams achieved 2-1 Test series victories in their last assignments, with the West Indies beating England at home, while India, went down under and defeated Australia for the first time ever away from home.

The home team named a 13-man squad for the series, including all-rounder Rahkeem Cornwall, who receives a maiden call-up. The Antiguan will be hoping to make his debut on his home ground at the Sir Vivian Richards Stadium in St. John’s. As it stands right now, the 26-year old has roughly a 50-50 shot at playing. The other big question mark is the form of batsman Darren Bravo, who is undergoing a severe form slump. The 30-year old southpaw needs to step up and lead this young batting line-up and build on the fantastic series victory over the English. His cousin, a certain Brian Charles Lara and former stylish middle-order player Ramnaresh “Ronnie” Sarwan were both brought in to work with the batsmen in the pre-series camp. The bowling should revolve around Shannon Gabriel and Kemar Roach, with skipper Jason Holder and all-rounder Roston Chase completing the key bowling quartet. Alzarri Joseph’s lengthy injury lay-off continues to be a cause for concern .

The issues facing the visitors concern the number four batting spot, the ‘Pant or Saha’  wicket-keeper dilemma and how many spinners to play. Having not played a Test for eight months, these are tough decisions to be taken by head coach Ravi Shastri and co. Ajinkya Rahane, Rohit Sharma & Hanuma Vihari seem to be battling for the number five & six positions in the order. The race for the lone keeper’s spot is arguably even more close, as Wriddhiman Saha is back from injury, however his replacement, Rishabh Pant has proved his mettle by stroking centuries in Australia and England recently. Lower down the order is the specialist spinner’s spot up for grabs, as Ravi Ashwin, Ravindra Jadeja & Kuldeep Yadav all vie for a spot, providing that the team management opt for six batsmen.

Three matches of test cricket all starting the same day covering different time zones will prove to be a great feast for a cricket aficionado.

West Indies with a mixed bag versus Afghanistan

The 200 milestone was so important for Australia at Edgbaston

Steve Smith and That Hundred

ODI Cricket: India and the West Indies Give A Glimpse Into...

How Online Bookmakers Have Changed Cricket